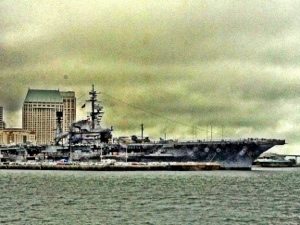 The most exciting bit amongst many exciting bits of being in San Diego was climbing into a real Soviet submarine in the Maritime Museum. I took hundreds of photos and luckily for everyone am not going to post them all.

It seemed my excitement and awe was a generational thing though. I was accompanied by Isabel who tried hard to appreciate the amazingness of being able to peer into torpedo tubes in a ‘enemy’ boat only decommissioned in 1994, and who gamely posed at intervals in the claustrophobic shell of an interior, but who then refused point blank to descend into a more recent USS model.

San Diego’s Maritime Museum is brilliant. As is the USS Midway aircraft carrier trip just along the harbour, and I don’t say this lightly. Trekking miles off the beaten track does not leave a lot of energy for the official tourist itinerary but the harbour front attractions of San Diego are the exception to my rule.

I was sad to leave. A great contemporary art museum, and a delightful morning regular coffee haunt (Christine’s Coffee Co., corner of Sixth and B in the no-imagination-spared city street grid) and great food and cupcakes and ice cream and and and…

Good thing we are moving on maybe. Give the digestive systems a break. 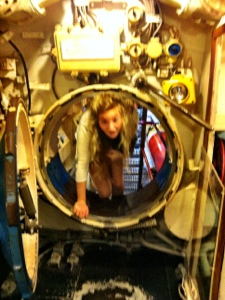 Isabel clambering through the sub 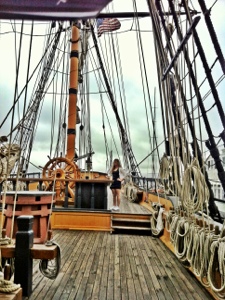 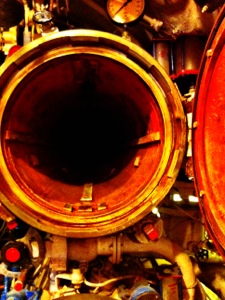 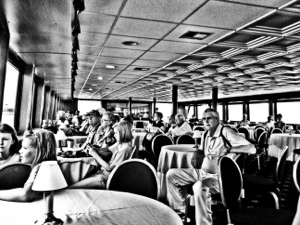 Fellow passengers on a harbour tour. There were an inordinate number of spry 6′ plus octogenarians looking very nostalgic in every maritime related museum experience in SD.

One thought on “A Soviet Sub in San Diego”