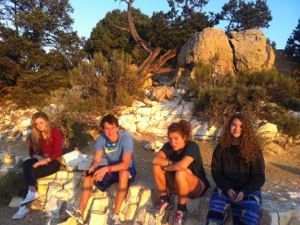 Sunrise at the Grand Canyon

Over the years on our travels we’ve (not) seen many iconic spots in less than perfect conditions. Scrabbling slippery steps on The Great Wall of China in a thunderstorm; sitting on a beach for three days in thick fog in Sirmione; tramping Fez in pouring rain for four days… Privileged and grateful to have had the chance to visit such places, I know, but still.

For a while yesterday we were set to add the Grand Canyon to the list. After a stunning drive up through Oak Creek Canyon from Sedona, we timed our late afternoon arrival to coincide with a golden afternoon light and in fact perfectly synchronized our first great view of the canyon with a huge black cloud. The sort of cloud that sits menacingly in one place and discourages even the wind from blowing.

I try to look for silver linings, but there’s no denying I wanted my personal clichéd view of the dizzying drops.

Still, we had a lovely time wandering in the more subtle grey light, and managed a bit of a descent into the canyon before the fading light drove us back up.

Dinner was in the sort of place that could kindly be described as having a certain faded glory, but put me more in mind of the lodge hotel in The Shining. The desolate deserted basement washrooms with their vast expanse of shiny linoleum were frankly terrifying.

A Monster Mash crew serving us up above in the gloomy dining hall weren’t any less threatening. Our personal waitress looked as if one poke with the tip of a finger would see her dissolve in dust to leave her grinning skeletal form wielding the serving plates.

But we hit rock bottom with the food. As the plates were placed before us, I began sniffing suspiciously. My spinach salad had all the signs of slimy had-it green leaves, but didn’t account for the revolting bad fishy smell all around me. Leaning over to my right I discovered that Jess’s prawn cocktail was all too clearly “off”. Jess had eaten one thinking it all smelt “a bit odd” but now wanted to regurgitate it. The offending dish had by now offended all of us so much that no one had any appetite for any of the miserable food on the table. For a Kempner dinner, that’s saying something.

The manager (an Addams family extra) agreed the prawns were offensively unacceptable and inedible, and quite understood our group loss of appetite. In a clean synchronized movement we arose as one and left and practically ran back to our lodge accommodation in primal fear of the South Rim ghosts and ghoulies.

Anyway. Fortified by lack of food and absence of food poisoning, we hauled ourselves out of bed at 5.30 am to see the sun rise over the eastern rim of the Canyon.

It was pretty magical and I’m relieved that I did not buy Over The Edge: Death in Grand Canyon by Ghiglieri and Myers before departing the area. Gripping accounts of all known fatal mishaps in the most famous of the World’s Seven Natural Wonders had me retrospectively risk assessing all we had done over the previous 24 hours. It was not pleasant.

I was only dragged away from obsessively working my way through the harrowing accounts (the book divides up fatalities into categories such as falls from the rim; falls from within; death from environmental factors etc. etc.) by the scenic vistas of the drive along Highway 66 towards Las Vegas.

It’s all a bit much to take in, the vastness of America and all things American. 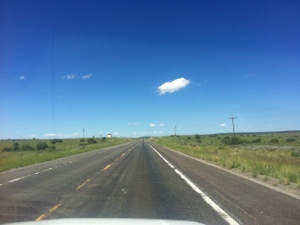 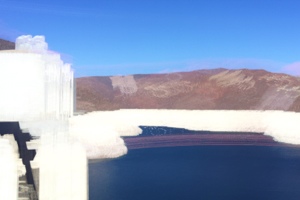