Running from birds outside the schoolhouse 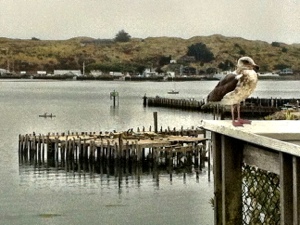 Leaving Napa Valley today, we diverted over to classic Hitchcock territory: Bodega Bay where The Birds was filmed in 1963.

As if bears and deer mice and everything else wasn’t enough, we had to terrify ourselves with a few cawing birds.

Bodega Bay was eerily foggy. A gull perched on a rail eyed us up aggressively. Out on the pontoon, a flock gathered ominously, fluttering feathers in a menacingly agitated way.

We took a few shots, squealed in delicious terror, and leaped back into the safety of the Chevy.

2 thoughts on “Birds in Bodega Bay”